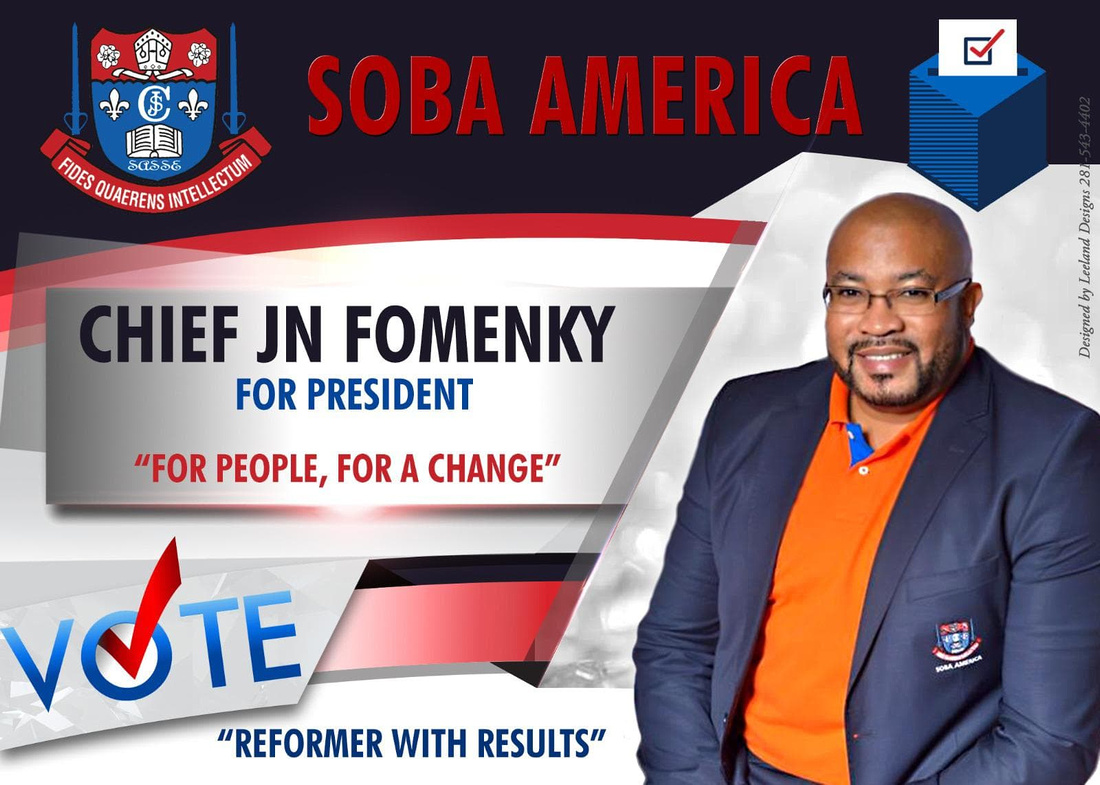 Chief JN Fomenky’s ability to create, built and sustain relationships across class line, age group, and social status is truly remarkable. He has the ability to connect, treat and talk to young Sobans the same way he would address senior Sobans. He is always in recruiting mood and always the first to make contact on behalf of SOBA America to recruit young and new Sobans to join this prestigious association. His ability to persist and insist until an ex-student of Sasse College becomes a registered member of SOBA America is only rivaled by President Itoe in the history of SOBA America, mindful of the ground breaking numbers of registered Sobans in 2018.  Soba America is 600 members strong today largely because of these relationships. Chief JN Fomenky believes there is strength in numbers, and rightfully so. Together with President Itoe and others, he continues to work tirelessly to increase our numbers and grow our association. Relationship building is a quintessential part to the continuity, sustainability and growth of SOBA America.  Chief Fomenky has it. 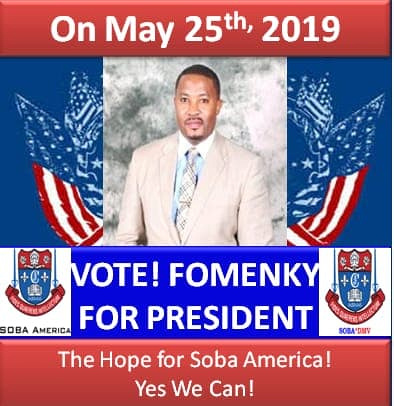 The Ability to Raise Money:*

If you have been part of any association – be it an alumni group, a traditional meeting group, Njangi house, class group or any group; you will agree with me that raising money is the most difficult thing to do. Chief JN Fomenky, is gifted is his ability to coin his message and leverage his relationships to raise money for a cause he believes in. It is truly remarkable that as Founder, Pioneer President, and now Chairman of the Board of Directors of USAK (United States Association of K-Towners – The Kumba Union) in 2017, together with his leadership team, Chief JN Fomenky raised more than $90,000 for a bole-hole project they embarked on. This is simply unbelievable – An association raising more than $90,000 for a cause in one night!  Prior to this blockbuster record, he again led this same association to raise over $30,000. It is the clearest evidence of his money-raising prowess. USAK association has half the numbers and potentials compared to Soba America.  As a matter of fact, you are talking of the core group of 12 or less people. If Chief and his executive team could raise over $90,000 with such a small group, imagine what he can do with SOBA America and all its resources. Imagine what he can do with a 600 member strong association like ours with intelligent and gifted men from all works of life. With Chief Fomenky at the helm, the believe the potential is endless.  With money in our coffers, the argument between National and regional chapters on profit sharing of convention revenue goes away and we can focus on better things. The numbers don’t lie, the records are evident!  The projects executed and accomplished are life changing.  A true reformer with results! 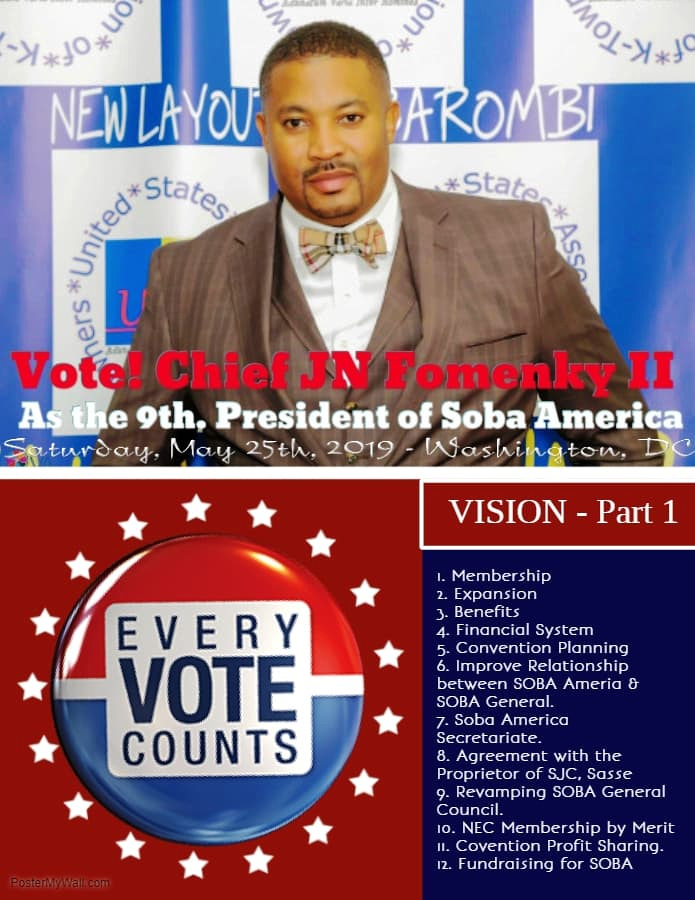 Proposal to Revamp the Death Benefit of Soba America:*

It is no secret that Soba America’s Death Benefit System is hugely flawed and unequitable. Chief JN Fomenky’s proposal to revamp this particular benefit is much needed and creates the kind of fairness and equity needed amongst us. It is a very simple proposal. Right now, if you join SOBA America with no biological parent alive, you will never benefit from the death benefit, albeit, you are obliged to pay $100 for yearly dues like anyone else. Think about that for a minute. How do you become part of an association that through no fault of yours, you can never be a beneficiary to the most important, most weighted benefit from that association? It is not fair. It is not equitable. Chief JN Fomenky proposes that upon registration, all Sobans who may have lost one or both of their biological parents will have the opportunity to elect and submit someone as a replacement.  For active/registered Sobans who may have exercised one parent death benefit, they will have the opportunity to include one more; for those who may have received two death benefits, they have already maxed out.  The critical component is that Sobans would be entitled to Two (2) death benefits in their life time. Equity first, then Equality follows. This is a powerful and brilliant proposal. It truly makes us our brother’s keeper and one more step to make our union stronger. It takes a brave heart, a true leader without fear to address hot issues and not just talk about, but propose a solution to it.  A solution that is equitable and fair.  JN Fomenky shows here that he is truly a solutions architect.  Someone who solves problems through sustainable solutions. 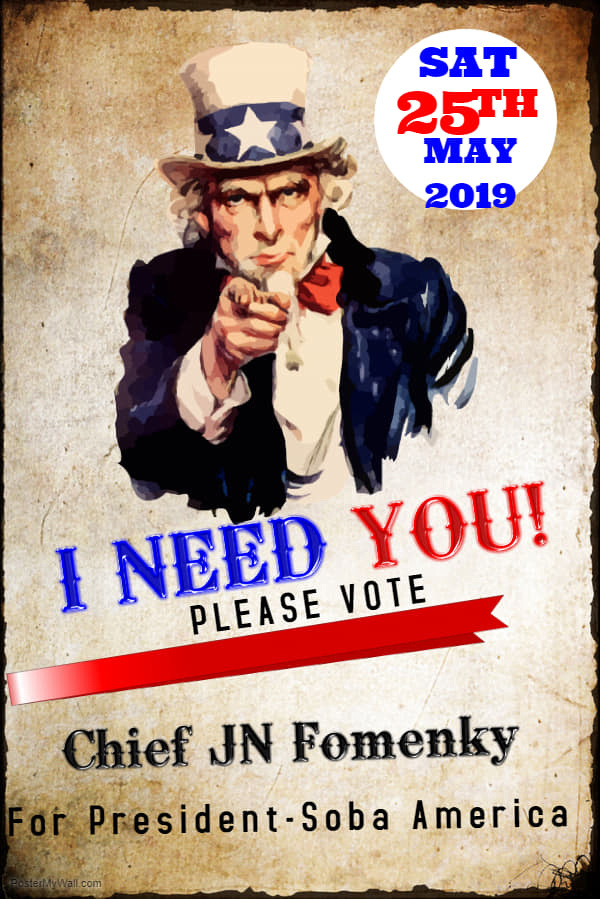 For the past Four years, Chief JN Fomenky as treasurer alongside Professor Ngassa as Financial Secretary has been the custodians of Soba America finances. A truly daunting task and we are so grateful to both of them for the sleepless nights spent to make our processes more accountable and transparent. To be clear, you can’t fix problems that have accumulated for 25+ years in just 4 years. Under Chief JN Fomenky’s watch, tremendous progress has been made with Soba America Finances. For the first time in our history, Soba America quarterly reports are posted online on the portal available to all registered Sobans to login and see for themselves. For the first time in our history, an independent audit was conducted by the Ayah Audit team and great recommendations were made on how we could improve our processes. Chief JN Fomenky in partnership with President Itoe and his Executive team continue to work tirelessly to systematically implement the recommendations of the auditors. For the first time, SOBA America’s financial books are now managed by Quick books; just like major fortune 500 companies in this country. While there is still a lot of work to be done, the progress made with our finances in the past 4 years alone cannot be ignored. Chief JN Fomenky and Professor Ngassa’s role in this tremendous progress cannot be overlooked. Continuing this progress is important. It is crucial and that is why we should give Chief JN Fomenky the chance as president of SOBA America to finish this good work. Chief JN Fomenky knows SOBA America finances more than anyone else in SOBA. A president who will oversea, empower, coach and manage all key sections to ensure integrity, transparency, sustainability, accountability through efficient and effective leadership. 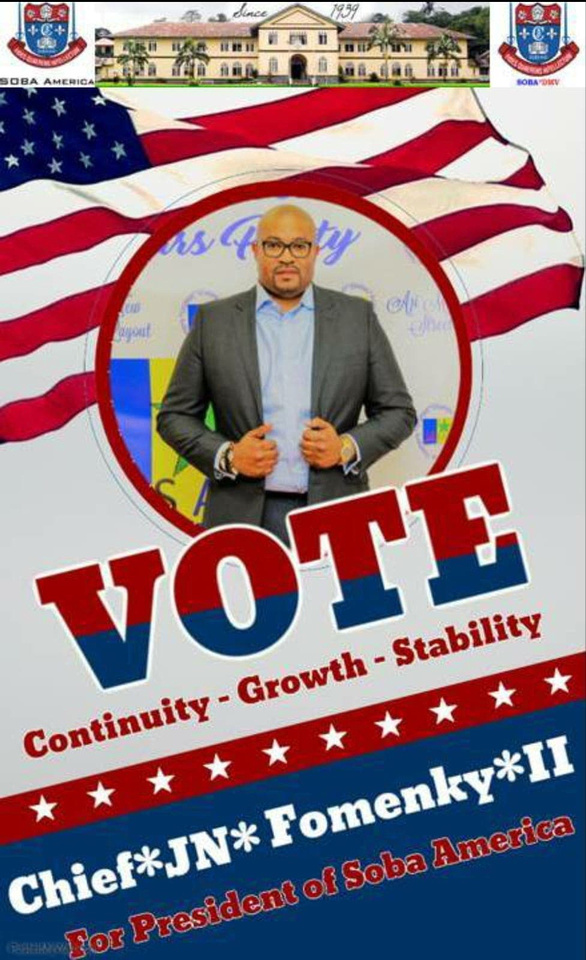 Partnership with SOBA, The Bishop & Leadership at Sasse:*

How many of us have been frustrated with the leadership of St. Joseph College Sasse - from the Principal right up to the Bishop? It is no secret that money sent by Sobans to improve the lives of students and teachers of Sasse College is garnished by the Bishops house and used to improve other schools like Repacol, Bishop Rogan College and others. Yes, we understand how the Church works, but that could be done better and we could attempt to do more, and ask for more on behalf of Sasse.  We need a leader who can stand for SOBA America and our mission. A leader with the right temperament and a backbone of steal to challenge the authorities, protect SOBA America’s mission and safeguard our resources. Chief JN Fomenky has worked with the Bishop through the Catholic University on projects over 100 million CFA.  He knows the Catholic Church and the politics a great deal. Chief is the only candidate who has elucidated in his vision how he plans to ensure a better outcome of projects sponsored by SOBA America.  An agenda of SOBA America, as approved by us – The Soba America General Assembly.

You see, Chief JN Fomenky is the only candidate running for President of Soba America in this race who hasn’t selected a VP candidate to form a unified ticket to give him a competitive advantage over the electorate or an unfair advantage over the other candidates. He is the only candidate that has refused to tell you who to vote for as VP! The only candidate who is not in violation of our by-laws, in essence the only candidate who respects our constitution.  While other candidates may claim to run as independent candidates, we see the joint message and posts denoting a unified ticket.  Even though it is the politically convenient thing to do, it is a violation of the laws set to govern our processes.  Chief JN Fomenky actually believes in the Soba America Constitution and what the founders intended when they created each position independent of each other; and mandated that you the people select your own VP that you the people select your own Secretary General, Treasurer, Financial Secretary and others. That your voices ought be heard and your votes be counted. That you the people are not influenced or coerced to vote for one candidate just because you chose to vote for his running mate. Chief JN Fomenky has an open mind and he is ready to work with anyone whom the general assembly chooses to serve as Vice President or any other capacity in our executive. That open mindedness is admirable for any leader. That willingness to take the high road even when there were easier and more convenient options is what we need in our leaders. An ability to do the right thing – not the easier thing.

One Man, One Vote!

On May 25, 2019, we strongly urge you to vote for Chief JN Fomenky to be the 9th President of this great Association.

A Reformer with Results! Transformational leadership at its best!

May St. Joseph continue to guide, protect us and watch over our families.